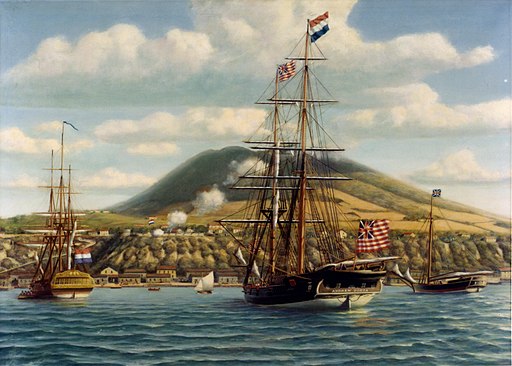 This week’s contest involves a holiday on the small island of Sint Eustatius in the Caribbean. The holiday, Statia Day, celebrates an event that occurred on November 16, 1776.

On that day, the ship “Andrew Doria” flying the banner of the newly minted United States sailed towards the anchorage of Fort Oranje in the capital Oranjestad. As she approached, the captain offered a 13 gun salute (one for each state in the new union). The governor of the island responded with 11 guns. Those 2 guns difference were HUGE to the crew of the ship.

In naval tradition at the time, the response to a salute from an approaching ship flying the flag of a sovereign nation would be 2 guns less than the salute. Governor de Graaff’s response indicated that Sint Eustatius recognized the sovereignty of the US, the first foreign entity to do so.

This event is, to this day, referred to as “First Salute” and the observance is called “Statia Day” (Statia is also what the natives call the island). Photos of some of the festivities from this year can be found on the government’s website here

Those who located this island before the hint were:

Once again, our hints have been the subject of ire for one of our contestants. As such, it has been requested that I explain my reasoning on this particular hint.

The wording of the hint was: “On Monday they celebrated here the anniversary of when 13 was answered by 11, which was the very first recognition of something big.” Since the sentence was past tense, I would have expected someone to glean that “Monday” referred to the day 2 days before the hint posted, i.e. Monday, November 16. From here there were a number of possible paths forward, here is the one I started with.

From the hint, you know it is an anniversary and a celebration. A quick look at the Wikipedia page shows that the entry for “November 16” has a section called “Holidays and Observances”. Within this section, there are 16 links for “Christian Feast Days” and 6 other holidays. The last of the 6 holidays listed is “Statia Day”.

For those of you who absolutely refuse to use Wikipedia, there’s also this. The word “recognition” seems important in the hint. How about googling “November 16 recognition”. The 3rd item down in that search (for me) was Britannica’s article on that day of the year, and it includes a blurb on “Statia Day”.

My point is this: Our hints are not designed to hold your hand and lead you directly to the spot. We fully expect you to bring some critical thinking skills to the party. My understanding of our amazing and incredibly talented user base is that you would want that as well. In fact, I suspect that many of you would stop playing if we dumbed down the game to feed the ego of one or two users, and we simply refuse to do so.

The user in question has been invited to stop playing if that is a problem for them, yet they continue to berate us for “stupid” hints that are “impossible”.

This will be our last response to them, and I fully apologize to those of you who had to sit through this.