The municipal flagpole in the small desert community of Calipatria, California was, at the time of build, the tallest flagpole in the world. The base of the flagpole sits 184 feet (56 M) below sea level, and the ball at the top sits at exactly sea level. 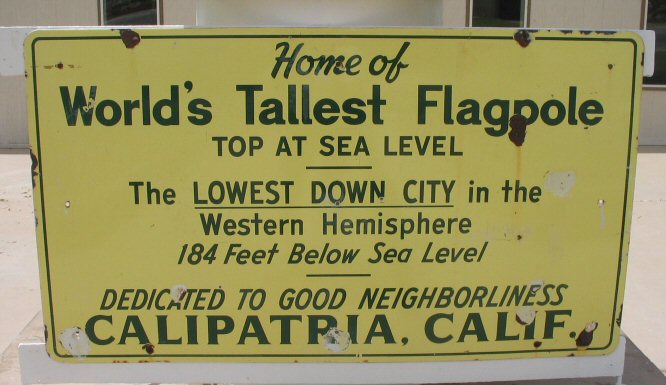 The “Good Neigborliness” on the plaque is a reference to one Harry Momita. Harry was the town pharmacist in 1957. He and his wife Helen had lived in the Japanese internment camps during World War II, but Harry was a dedicated patriot, proud of his inherited home.

On a trip to visit their son in Los Angeles, the Momitas were in a horrible car crash. Helen was killed instantly, and Harry was critically wounded. The community drew together — they kept the pharmacy open with the help of a pharmacist from the next town over, they collected donations towards paying for Helen’s funeral and Harry’s medical care. When Harry was released and returned home, he was so touched by the graciousness of the town, that he decided he would work to create something that would make the town stand out.

The town’s elevation had long involved jokes about creating a building or something that would top out at sea level, but Harry took this idea seriously. He began to collect donations to build the flagpole, he got an architect and engineer to donate their time, he got a steel pipe company to agree to do the job for cost. Harry’s story and his quest started to make national and international news.

In May of 1958, the television program “This Is Your Life” featured him (the previous week’s guest was Kirk Douglas). They spotlighted this immigrant with a tragic past, still staunchly patriotic. They talked about his and Helen’s time in the detention camps. They also talked about his desire to build this monument to “Good Neighborliness”. Through the program, he won a car and several other prizes, including $1000 in cash — the last bit of cash he needed to start construction.

Those who found it — all before the hint: