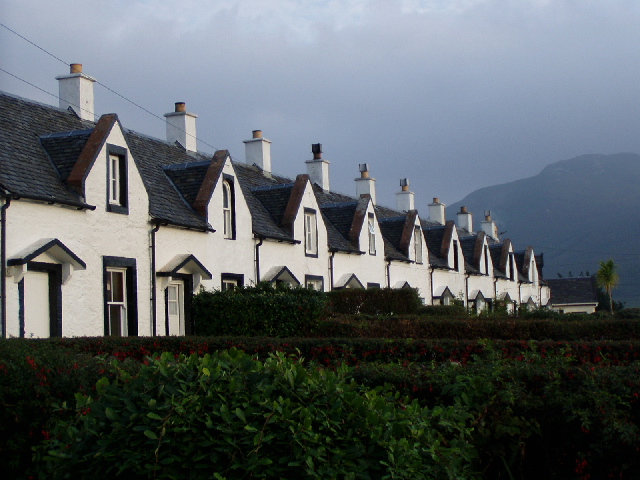 The Highland Clearances were a very controversial set of policies carried out in Scotland in the mid-1700s to the mid-1800s. Landlords, trying to increase income, pushed out traditional open-space farmers and sustenance hunters to make way for large-scale sheep farms (which paid much higher rent). The farmers and hunters who were pushed out of these lands were expected to find employment in other industries, including fishing.

To this end, on the Isle of Arran, this row of cottages was built to house those who were cleared from the countryside who were expected to turn to fishing in the Firth of Clyde. The builders put a different type of window in the upstairs in each cottage, with the idea that the family of one of the fishermen could signal them by lighting a candle in that window and the fisherman who lived there would know to come in.

Of course, it didn’t really work that way — for one thing, the folks who were cleared from the land weren’t too keen to just jump into fishing. The cottages sat empty for a long time.

Currently, they are used as vacation lodging (think AirBNB or VRBO).

Those who saw the light included:

None after the hint.