Shahrisabz, historically known as Kish or Kesh, was the birthplace of Timur, a 14th century emperor of a large swath of south-central Asia, including all of what is now Iran and Afghanistan, as well as parts of India, Syria and Turkey.

This portion of the city is home to his Summer Palace Ak Saray. And, of course, there HAS to be a statue, right? 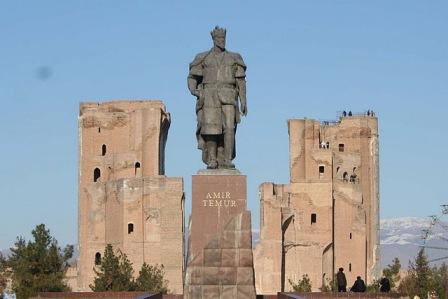 There is a tomb here as well for Timur, though he never occupied it and two unknown people are there now. His oldest son, Jehangir, is buried in the mausoleum complex to the lower right of the image (just right of the octagonal fountain at the bottom).

Those who found the site included: