From Atlas Obscura:
Breaking up the flat agricultural areas of Argentina’s Pampas is a guitar formed entirely out of trees. Stretching for 2/3 of a mile, the multi-colored instrument was created by one Argentine farmer to memorialize his wife who tragically died at the age of 25.
After flying over fields in the Pampas that resembled a milk pail, Pedro Ureta’s wife Graciela suggested they embed a design into their own fields. Ureta never really had time to think about turning his field into a giant work of art, and told her they would put the project off until they both had more time. In 1977, Graciela unexpectedly died from a brain aneurysm, and her dream was lost forever.

Crushed by the loss of his love, a few years later Ureta began working on designing a guitar in his field that could be seen from above by airplane. He settled on the design because his late wife loved the instrument and he wanted to memorialize her on his land.

Working tirelessly to plant and cultivate the trees, Ureta created a perfect guitar shape, complete with a star-shaped hole in the middle. Using mostly cypress trees to form the outline, Ureta used blue eucalyptus trees to accent the strings on the neck of the guitar. Easily visible from airplanes, the guitar brings joy to many who fly over the Pampas.

Ureta himself is afraid of flying and has only seen the guitar he created to remember his companion, Graciela, in photos. 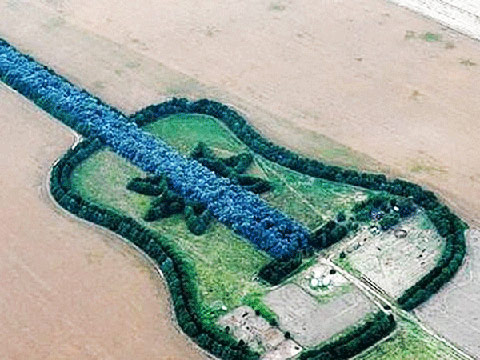 Found, with a bit of music on the side: