The border between Costa Rica and Nicaragua was shown incorrectly on Google Earth and Google Maps, which was an excuse for a Nicaraguan military commander to order his troops into Costa Rican territory and replace the Costa Rican flag with the Nicaraguan flag. 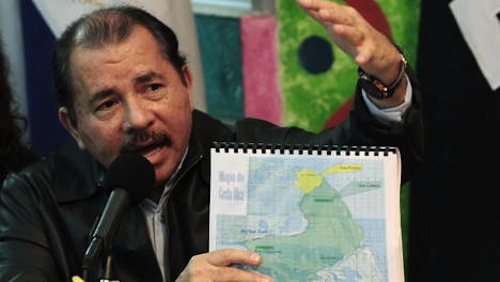 At least this is the story that hit the media. In fact, the exact borderline in this area is under dispute between the two countries ever since 1858, as you can read in this post on Ogle Earth blog.

When I put up the contest, Google Earth showed the wrong borderline, which was corrected a few days later (just before the hint came up). You can see the differences in the ‘hint’ post of this contest.  However, Google Maps still shows the wrong border as I write this.

Those who successfully invaded their neighbour country