The telescope was first proposed in 1994, approved in July 2007 with construction beginning in 2011. It was declared fully operation in 2020. Construction involved moving about 9000 residents out of the area to creat a radio-quiet zone.

It has a novel design, using an active surface made of 4,500 panels to form a moving parabola of metal panels in real time. The cabin containing the feed antenna, suspended on cables above the dish, can move automatically by using winches to steer the instrument to receive signals from different directions. It observes at wavelengths of 10 cm to 4.3 m. 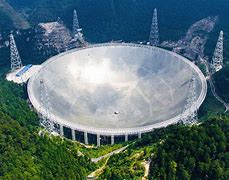 Karel used this location while it was under construction in 2014 for contest #369.

Those who found the site (some for the second time) were: