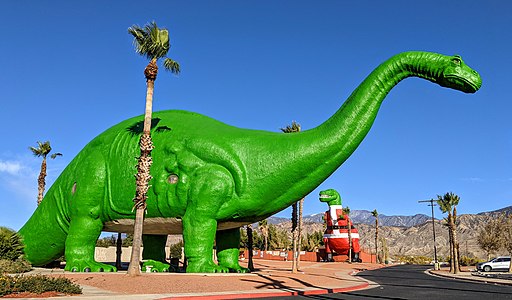 Claude K Bell was a sculptor and artist who worked at the Knox Berry Farm amusement park in Buena Park, California. In 1958, he opened a restaurant off of Interstate I-10 west of Palm Springs, then in 1964, in an effort to bring more business to that restaurant, he set out to create this tourist attraction.

By the time he died in 1988, Bell’s dinosaurs included an apatosaurus named “Dinny” and “Mr. Rex” the Tyrannosaurus, and the site had been included in the movie “Pee-wee’s Big Adventure” and the Tears for Fears video for “Everybody Wants to Rule the World”.

Today, Dinny is painted bright pink and serves as the exterior of a gift shop and museum promoting young-earth creationism.