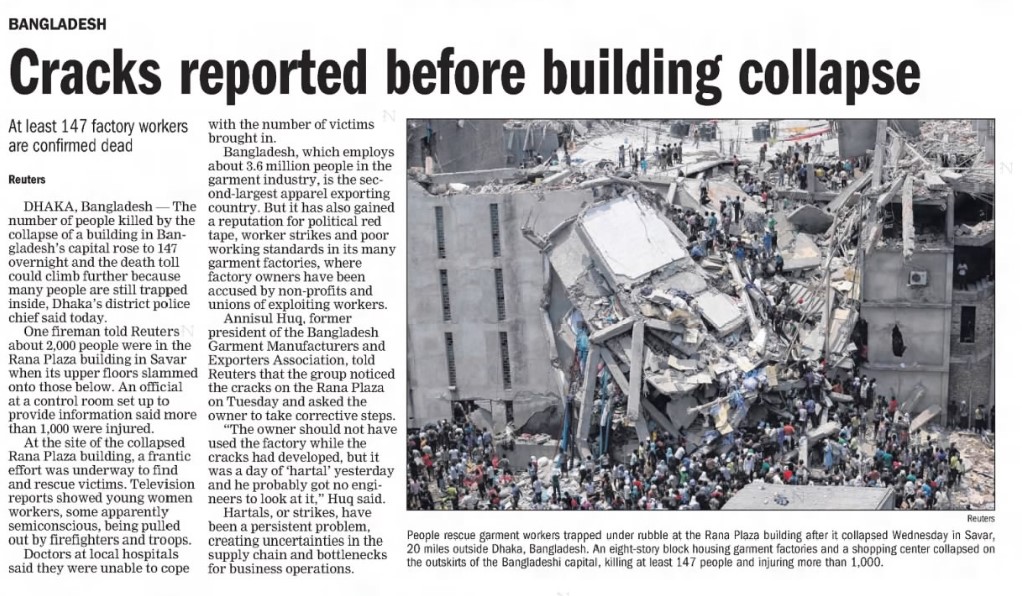 Rana Plaza was a multipurpose building in the heart of the largest city in one of the most densely populated countries on earth. There were shops and a bank on the lower levels of the 8-story building, a series of clothing factories that employed about 5000 people in shifts, and a few high-end apartments on the 2 highest floors.

Originally, the building had been 4 stories, with shops on the first floor and offices on the other 3. The remaining 4 floors were added to house the factories, and had been done so without a permit or any engineering studies. The infrastructure on the original floors were not sufficiently reinforced to handle the additional weight of all those people and machines, not to mention all that additional concrete and steel.

On April 23, 2013, a local news team showed cracks in the building. The building was evacuated, but the managers of the clothing factories told their employees that they were to return to work the next day or lose an entire month’s pay.

The next day, shortly after the factories filled with workers, there was a power outage (which was a fairly common occurrence) and the diesel generators on the roof were started. These generators were old and not well balanced, which caused significant vibrations in the building. Within minutes of the generators starting, the building collapsed.

Of the 3000+ workers in the building, 1,134 perished. Hardly anyone else escaped injury, most of them quite serious.

There are a couple of short documentaries about the aftermath of the collapse here and here. I’m not going to embed them because, frankly, they are VERY hard to watch, but they have a pretty important message about the cost of fashion.