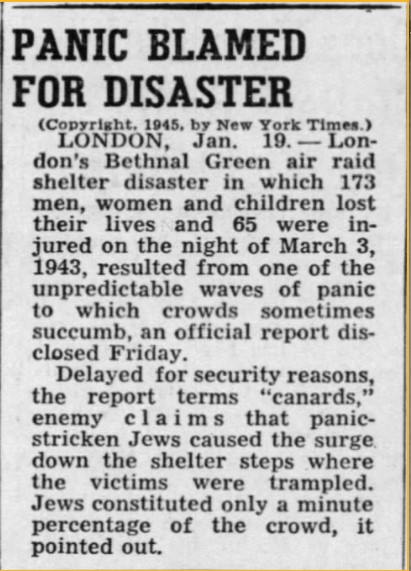 At the height of the Blitz against London in WWII, the Air Raid siren went off in anticipation of a retaliatory strike by the Germans following an air raid earlier that day. The home defense fired off a new kind of rocket against the encroaching buzz bombs. The sound of the rockets were unfamiliar to the people and they thought it was a new kind of bomb landing nearby. People on the streets went into shelters, including this non-functional tube station. As the crowd streamed into the station, a woman and her child tripped, creating a cascading mass of bodies. At the end of it all 173 were crushed and/or asphyxiated to death.

Because of the war, and the potential for the enemy to use this information, the government withheld the information about the disaster for nearly 2 years.