The Philadelphia Cricket Club is the oldest country club in the United States.

Founded in 1854, the main sport here was cricket initially, but golf and tennis quickly became primary. The cricket league was disbanded in 1929, but revived in 1998, and has become quite popular here. 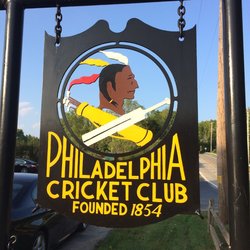 Those who batted a century before being dismissed included:

and those who needed an extra: