The Taichung Power Plant is a coal fired power plant providing about 5800 MW of power into the Taiwanese power grid. It is both the largest fossil fuel power plant in the world AND the largest emitter of CO2 in the world, coming in at a hair under 40 Million Tons a year, or, as the hint mentioned, about what the entire nation of Switzerland emits. 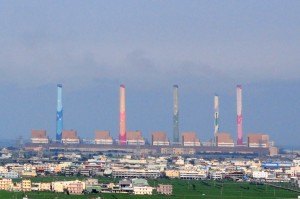 Those who fired up the correct answer and got the generators up to speed included:

And those who needed the just little push from the hint: