Although we’ve seen it spelled Gaddani in some sources, Gadani seems to be the consensus version. We’ve allowed for some place-name latitude as some of you clearly did it the old fashioned way by scanning up and down the coast. The site pictured is about 4 kilometers SSW of the actual town of Gadani, but we had to find an area with some ships actually being broken up. Ship breaking runs up and down the coast in this area for quite a distance. Gadani is the third largest ship breaking operation in the world. It is a nasty, dirty, and not particularly safe, line of work.

This is usually how ships get up onto the beach to start the process:

Video running down the coast at Gadani:

As you may have noticed, the cover shot for the video doesn’t appear in the video. So here is the full story of the Front Driver arriving at Gadani 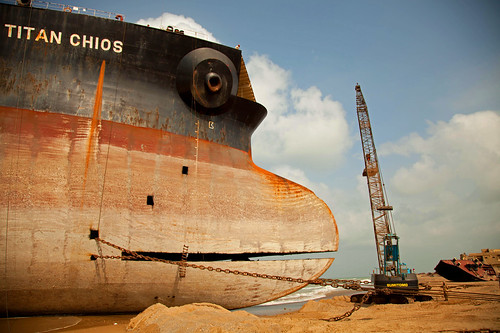 Many, many, pictures on Flickr if you search Gadani. Many of them may not be downloaded or linked, or more of them would be here.